This month, I will explain the steps I use when teaching a horse to accept my touch for the first time. The techniques I use here should be practiced only by an experienced rider and trainer, and require the help of a quiet and well broke horse. This is the least stressful way I have found to have a horse let me touch them and begin a partnership with them for the first time, but these exercises are very advanced and I do not recommend that you try them at home.

To start, I put both horses in a round pen. I ride the broke horse, and I have a lariat rope with me on my saddle. My broke horse has two jobs here. First, he makes the process easier on me. By the time I start communicating with the new horse from the ground, he will already have an idea of the meaning of pressure and release, and will have lost most of his anxiety about my presence. Second, my broke horse will make the process much easier on the new horse. His calm presence and trust of me will greatly reduce the anxiety the new horse will feel in the unfamiliar situation.

The first thing I want to do is to get my rope around the new horse’s neck. I want to do this as early in the process as possible because that is my connection to him, and allows me to start teaching him about pressure and release and building a relationship and communication. I like to get the rope around his neck as calmly as possible, without making a big deal out of it. When the horse first feels the rope touch him, it is likely that he will take off. I don’t try to restrain him, just slip him the rope and let him get used to the feel of it. Wait for him to settle down before you make a move to do anything else. I want to be careful not to cut off my horse’s air when I have the rope around his neck.

When he has settled down from the initial worry of having the rope on him, I want to start teaching him to face me and keep his eyes on me. To do this, I’m going to dally the rope around my saddle horn briefly. When he feels the pressure of the rope, I want him to turn and face me. As soon as he does, I release the pressure. I release even if he just happens to face me for a second in the middle of a spin, buck, or rear. It doesn’t matter what he is doing at this point, it just matters that I begin to teach him that when he faces me, he gets a release. It is very important that my release is instant and well timed. I like to start sacking the colt out a little with the rope, gently flipping it around his back and hocks. I keep practicing having the colt face me by dallying up briefly and releasing when he looks at me for quite a while. At first, I will be in the middle of the pen and the colt will be working along the edge. As he gets better and better at learning to face me when he feels pressure from the rope, we will trade places so that he is standing in the middle and I will ride along the edge. My goal is for him to follow me with his eyes as I ride around the fence. If he keeps his eyes on me, I don’t put any pressure on the rope. If he stops looking at me, I will dally up to bring him back to me and then release as soon as his eyes are back on me. It is easy to want to rush this part, but it is very important that I have the colt following me everywhere with his eyes consistently, with little correction needed from the rope, before moving on.

The next step is to start shortening the rope as I ride in closer and closer. I will do this gradually, and if he wants to leave at any point I am not going to fight him, but just slip him some rope until he is calm again, then start working where we left off. Once I am close enough, I will reach down and touch the colt on his withers, give him a quick scratch, and release. If he pulls away, I don’t make a big deal out of it. I just slip him some rope and once he is calm we go back to work. Once I can touch him on his withers and scratch his hip without causing him alarm, I am ready to start working from the ground. At this point my broke horse has given me all the help he can. I will step off and let my broke horse be loose in the pen, and I will keep the lariat rope in my hands. I’ll play the same game with my colt that we played while I was riding. All I want is for him to keep facing me and looking at me. Now that he understands that he needs to give to the pressure of the rope, I have some control if he goes to leave, and I can ask him to stop and face me. Everything I do here is slow and steady. I’ll move towards my colt as he will let me, always bringing him back to face me if he leaves. Once I can touch him I will, but for short periods of time, making sure to release him if he stands quietly. I like to loosen the lariat around his neck and scratch him on the withers like another horse would. I work on both sides.

Last, I like to take a soft rope halter and slip it over his nose a few times, although I don’t tie it on. It’s important not to overdue the horse’s first day in school, so that is about all I like to do at first. The most important thing is to make sure that his first experience with human touch is a good one: positive, kind, and gentle.

Enjoy your horses and until next time, may God bless the trails you ride. 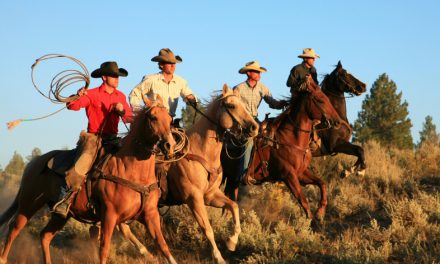 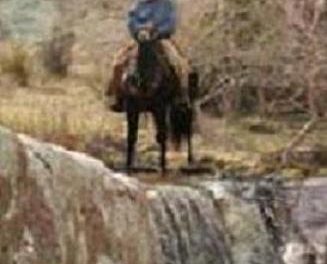 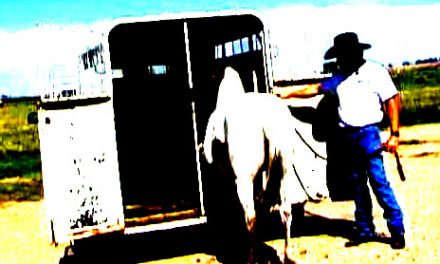 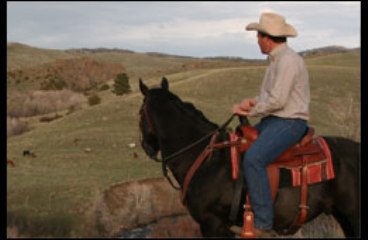