Don’t have a helper available to assist you work your horse at liberty?  No problem!  Here’s a variation of the neat method I gave you to change your horse’s direction when working at liberty in a paddock or arena when you don’t have an assistant.  You can still ask the horse to change directions at liberty without “manually” stopping him and turning him around.  Instead he will learn to respond to your commands to turn and change directions on his own as he travels on a “diagonal track” across two of the paddock/arena’s diagonal corners.  This allows him to keep his forward momentum as he changes direction.

Here’s how to do it.  (Reminder: whenever working at liberty without an assistant, work in a moderately sized area.  Too large a paddock or arena will cause you to lose control of your horse.)

This time I’ll use an example of a horse traveling at liberty around the paddock to the left.  To change directions to the right, first make sure that his attention is you.  If it isn’t, use your voice to say “hey” or call his name.  If you need a little more emphasis, gently flick the longe whip toward the ground to make sure he has his eye on you.

When you are ready to ask him to change directions, walk toward him as he is moving down the fence line and raise the whip horizontally so it points to the spot where you want him to turn around.  This gives visual cue to stop or block his forward movement.    Say “whoa” and hold the whip in position.  Most horses will react to their forward travel being blocked by turning or pivoting to face the other direction.

When learning this maneuver, a horse may just stop not knowing what you are asking him to do.  Give him a little reinforcement by giving him a cluck and walking closer to him as you keep the longe whip up in your left hand to block him from continuing to the left.  He should pivot and turn to travel in the opposite direction. Use your voice, and whip if necessary, to send him off.

No matter what technique you use, make sure the horse stays forward while changing direction at liberty.  Use your whip behind him to encourage forward movement.  However, if the horse gets anxious and increases his gait on his own, use voice command to slow him down.  Use your voice to keep his attention if he starts looking over the fence or gets distracted from you.

After working through different gaits, speeds within gaits, and both directions it is time to evaluate him. If he stays “quiet” and responsive, after you have seen a definite indication that he has played, it means that he has “burned off” some of his inner energy out.  His nostrils should be flaring. This shows that he has gotten some exercise. A horse should be brought to this point to build his conditioning each time liberty work is done.

Wind down the liberty work with an easy trot or jog to the walk, then ask your horse to “whoa” along the fenceline. I always want my horse to address and look at me when he stops.

Because liberty work asks the horse to move forward and away from the handler, we want to end each liberty lesson by reinforcing in the horse’s mind that he should not flee or run from us.  After asking horse to “whoa”, lower the tip of your whip to the ground and walk toward the horse.  Stop within a few feet of him and give him the  “come to me” command.  If he needs more encouragement to come to you, extend your hand out toward him.  As he steps toward you, step backwards so he follows you.  He has to walk straight toward you until you ask him to “whoa” with a voice command.  If needed, reinforce the “whoa” by holding your hand in front of his face like a stop sign.  Praise him when he follows and stops with you.

After liberty work, the horse is ready to go on to working in-hand maneuvers or under saddle.  Because he has been allowed to release some of his inner energy, he will be in a much better state of mind to concentrate on what you will be asking him to do in the lesson.

Liberty work improves the horse’s respect, attention, and balance… all the things you will need for work under saddle!

For more information about Lynn Palm, her clinics in Florida and other parts of the U.S., DVDs and more, visit www.lynnpalm.com or call 800.503.2824. 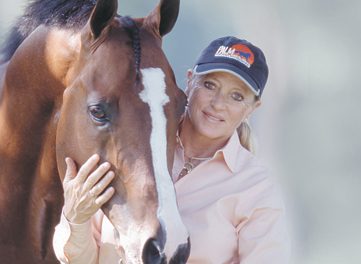 How To Get The Most From Your Veterinarian 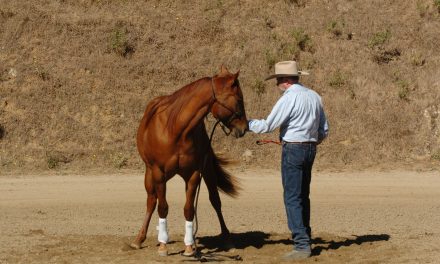